​​In Kentucky, in the early fall of 2016 (149 years after Muir began his southern trek), I began my examination of conserved lands along Muir’s route. I was equipped with my DeLorme Map Atlas & Gazetteer and advice from friends associated with the Kentucky Nature Preserves Commission, Department of Conservation, and Kentucky Natural Lands Trust. ​In Muir's own words, from "A Thousand-Mile Walk to the Gulf” (1916, republished 1998):

[after crossing the Ohio River on Sept. 2, 1867] I steered through the big city [Louisville] by compass without speaking a word to any one. Beyond the city I found a road running southward, and after passing a scatterment of suburban cabins and cottages I reached the green woods and spread out my pocket map to rough-hew a plan for my journey. My plan was simply to push on in a general southward direction by the wildest, leafiest, and least trodden way I could find, promising the greatest extent of virgin forest. Folding my map, I shouldered my little bag and plant press and strode away among the old Kentucky oaks, rejoicing in splendid visions of pines and palms  and tropic flowers [sic.] in glorious array . . .  the great oaks seemed to spread their arms in welcome . . . those [oaks] of Kentucky excel in grandeur all I have ever before beheld . . .  [in] magnificent avenues of shade.

Louisville has dramatically expanded in population size, scale, and sprawl over the past 150 years. A traveler mimicking Muir’s route through the city might first stop on the banks of the Ohio River for an impression and education about the early history of river transportation and the unique geologic landform that brought about the settlement of Louisville at the head of the great cascade on the Ohio (before that feature was removed/impounded). Visit the Frazier History Museum and walk in some of the city riverfront parks (Waterfront, Shawnee, or Chickasaw Parks). These are part of the network of Louisville metropolitan parks intended eventually to circle 100 miles around the city. Champions of the goal to create a necklace of parks and greenways around Louisville are inspired to realize a concept first envisioned nearly 130 years ago by park designer and landscape architect, John Olmsted.
​
​Although Muir reported no stops within the city, one might be tempted to stop to visit the campus of Louisville University, or divert for the famous Churchill Downs horse racing track and Kentucky Derby Museum.
​ 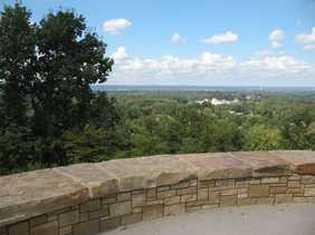 Iroquois Park overlook
In approximating Muir’s route southward from the city, I chose to follow the Southern Parkway and Southside Drive (State Route 1020) and stop to explore Frederick Law Omsted’s originally designed Iroquois Park, the largest unit (720 acres) of the Louisville – Jefferson County Metropolitan Parks system. Park facilities have undergone recent modernization, including lovely public observation decks on the knob summits, which provide commanding views over the city. Park trail walkers (more than 3 miles of walking trails) will experience diversity of older growth oaks and other forest communities similar to those that impressed Muir, along with a re-established hill-top prairie.
​
​
Also check out other units of the impressive Louisville-Jefferson County Metropolitan Parks system, and the ambitious program to realize the Frederick Law Olmsted vision for a necklace of parks and greenways around the urban periphery (learn more about Louisville’s 21st Century Parks goals and programs at ​www.Olmstedparks.org, www.21cparks.org  and www.theparklands.org ).
​
​From Louisville’s Iroquois Park, I drove south on the old National Turnpike (the likely route Muir walked), which today is State Route 1020, paralleling modern Interstate Highway 65 and the CSX mainline railroad connecting Louisville to Nashville.
​
Other good ways to gain impressions of the oak and other upland and bottomland forests that captured Muir’s attention in northern Kentucky are to divert slightly from his probable route and visit the Louisville Nature Center and its adjacent Beargrass Creek State Nature Preserve, or go farther south 10 miles from Louisville to walk the Siltstone Trail or other trails through hardwood forests of the 6,400-acre Jefferson County Memorial Forest, one of the Louisville Metro Parks Natural Areas.
​
>>>CONTINUE ON through Kentucky barrens and knobs . . .
​