Muir’s walk across Georgia and on to the sea 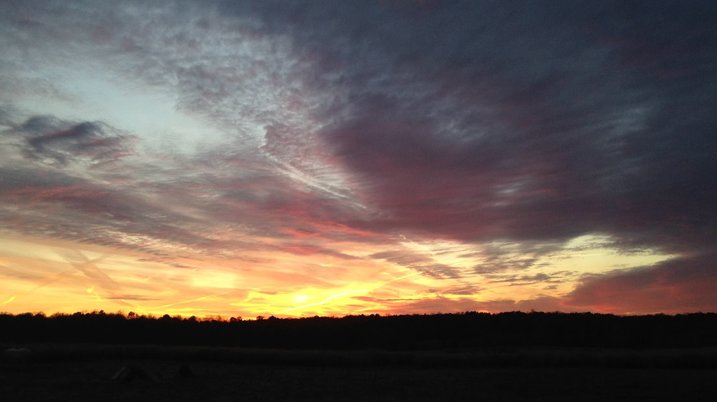 Sunset over the Georgia Piedmont
Muir quickly departed his brief stop in extreme western North Carolina, and on September 21, 1867, headed south into Georgia. He described a “most luxurious forest” as he crossed more mountains on his route to Blairsville, GA, which he disparaged as “a shapeless and insignificant village” but grandly encircled by forests and “banded” hills.

Muir’s route through the Blue Ridge Mountains of northern Georgia is now closely duplicated by US Hwy 19/129 - GA Hwy 11. Blairsville today is a relatively prosperous, small town, located in the heart of the Chattahoochee National Forest and attractive for public recreation and vacation homes. This area can still be described as being a most luxurious forest, although the forest is in successional stages of recovery from the forest clearance/butchery of the late 19th and early 20th centuries. First land acquisitions for the Chattahoochee National Forest began in 1911 under authority provided by the federal Weeks Act, and the forest now exceeds 750,000 acres across northern Georgia. (See also the National Forest Foundation.)

Georgia’s Vogel State Park is located off US Hwy 19/129 at the foot of Blood Mountain, and was one of Georgia’s first state parks, established in 1931. It  offers a variety of hiking trails, including several that climb and connect above to the Appalachian Trail. Muir would have climbed the Long Ridge on his ascent of the Blue Ridge Mountains, where the modern visitor will find the Appalachian National Scenic Trail that crosses Muir’s footpath (see also www.appalachiantrail.org ). Highlights nearby on the Appalachian Trail (AT) that may inspire a visitor to strap on a backpack--after parking at Neels Gap on the ridgetop or at the Forest Service’s Desoto Falls campground--include DeSoto Falls, a short distance west, or a hike farther eastward toward the 9,100-acre Raven Cliffs Wilderness with its waterfalls and scenic cliffs. The AT begins in Georgia, which contains 76 miles of the total 2,180 mile-long trail as it heads north to Maine (see www.georgiatrails.com). Going even farther east one now will find along the Richard B. Russell Scenic Highway a number of beautiful mountain parks and trails around Helen, Georgia , including the Smithgall Woods Conservation Area and Unicoi State Park.
​​
Muir descended the southeastern slopes and hollows of the Blue Ridge Mountains, beyond which he described a “vast uniform expanse of dark pine woods” that extended on to the sea. Today a visitor following US Hwy 19/129 will find these mountain slopes are occupied by Georgia’s Chestatee Wildlife Management Area, which consists of 25,000 acres in the Chattahoochee National Forest. Continuing south on US Hwy 129 and GA Hwy 11, you will be entering the Piedmont region of Georgia, distinguished by an undulating landscape of lower hills and valleys with a mixture of woodlands and farms. Passing on through the town of Cleveland and southward, like Muir you will reach what he called a “comfortable, finely shaded little town of Gainesville” and the upper Chattahoochee River, which Muir declared was “the first truly southern stream I have met…. richly embanked with massive, bossy, dark green water oaks, and wreathed with a dense growth of muscatine [sic.] grapevines… and enriched with other interweaving species of vines and brightly colored flowers.” Outside of Gainesville Muir lingered at the country home of a friend and explored along the Chattahoochee River and its forested bottomlands. 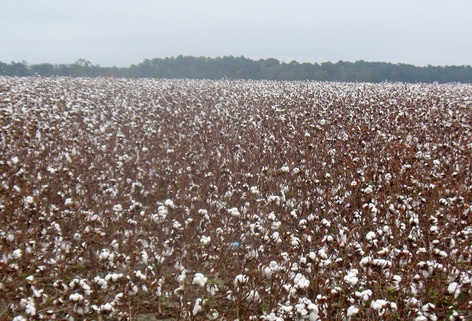 Cotton field above the Savannah River, GA
Regrettably, the river scene that Muir witnessed near Gainesville is flooded by another impounded reservoir that turned the Chattahoochee River into Lake Sidney Lanier (one of Atlanta’s water supply sources). For a glimpse of the river bottomlands and bluffs forests that engaged Muir’s attention, one now must find vestiges either in the Chattahoochee River Park slightly upstream and north of Gainesville, in River Forks Park, in one of the other public parks and boat launches along Lake Sidney Lanier southwest of Gainesville, or go some distance farther south of that city below the Lake Sidney Lanier reservoir’s dam where the 48-mile-long Chattahoochee River National Recreation Area begins--where the river again flows below the impoundment on to Atlanta.

Muir did not linger long in Gainesville nor on his friend’s estate on the river. After losing his way and perilously swimming across the Chattahoochee’s rapid current at risk of drowning (in the place where that river is now a passive lake), he headed eastward  on what is now called the Athens Highway (the continuation of US Hwy 129/ GA Hwy 11). Along this road and immediately east of Gainesville, one today finds Georgia’s Allen Creek Wildlife Management Area.

Pass over the Piedmont region of undulating terrain of farms, woodlands, and small creeks, and through the town of Jefferson, on to Athens and the home of the University of Georgia. In this area the local Oconee River Land Trust and Athens Community Open Land Trust have been busily protecting natural places. Muir was unusually impressed by the town of Athens, praising it as “a remarkably beautiful and aristocratic town (with) many classic and magnificent mansions.” You too will enjoy Athens , its history and remaining classic antebellum mansions, and the University of Georgia campus. Visit the Georgia Museum of Natural History on the university campus to learn more about the natural habitats and wildlife of the region, and discover more nature trails and parks nearby. On the north side of Athens, off Old Commerce Road and near the Sandy Creek city-county recreation park, you can learn and experience more about  Georgia’s Piedmont environmental features in the Sandy Creek Nature Center’s exhibits and resource library, or in its 225 acres of woodlands and wetlands traversed by 4 miles of interpreted trails that interconnect with the longer North Oconee River and Cook’s Greenway Trails. On the immediate south side of Athens find the State Botanical Garden of Georgia and Rock and Shoals Outcrop Natural Area and public greenway along the Oconee River at the juncture of the Middle and North Forks of that river.

Over the next several days Muir’s route took him southeastward across the woodlands, grasslands, and farms of Georgia in the direction of the river city of Augusta. He described a zigzag course amid old Georgia plantations, over hot, sandy lowlands, interspersed by pretty water springs, along notable forested stream banks, areas of tall grasses some reaching 10-12 feet in height and mixed with superb flowers, across sunny meadows and following the wet forested borders of slow streams and small swamps. On his way Muir marveled at experiencing “the most gorgeous sunset I ever enjoyed in this bright world of light.”

Today one has to look hard to find fragments of the natural landscapes and ecological communities that Muir described in this part of Georgia. Most of the area has been converted for agriculture and silvaculture. From Athens take US Hwy 78/ GA Hwy 10 through the towns of Lexington and historic Washington. Stop to visit the Callaway Plantation just west of Washington to witness a historic plantation and learn more about the 19th-century agriculture and human society of Piedmont Georgia. On the north side of Thomson, one can poke around the margins of the 12,700-acre Clark Hill State Wildlife Management Area on an impounded tributary of the Savannah River and the  J Strom Thurmond Lake.
​
An alternative but more southern route from Lexington by way of GA Hwy 22 into Crawfordville will enable a modern traveler opportunity to visit the former plantation of the vice-president of the Confederacy in the American Civil War at A.H. Stephens Georgia State Historic Park and where you will find 20 miles of trails. From Crawfordville one can move on east along modern interstate-standard US Hwy 20 to rejoin Muir’s more likely path in Thomson, GA. In Thomson find a local segment of the Bartram Trail – the first of several times where Muir unknowingly followed the routes of famous father-son naturalists and botanists John and William Bartram in their explorations of the South a century prior to Muir’s trek (see also the Bartram Trail Conference).