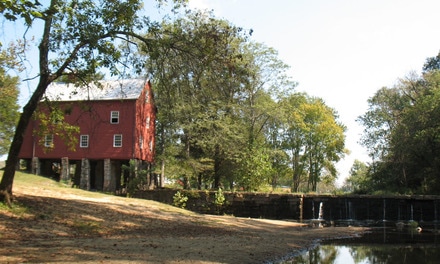 Sgt. Alvin York Park, Wolf River mill house
Augmenting my own observations, DeLorme maps, and information acquired from the Internet, I consulted with several knowledgeable Tennesseans in order to trace and describe Muir’s route in this state and the notable conserved lands along his path.

Crossing the Cumberland Mountains
After walking generally southward across middle Kentucky from Louisville to Burkesville, Muir reached Tennessee on September 10, 1867, and hiked on a “zigzag” course on primitive roads and trails through a “generous bosom of woods” over the Cumberland Mountains. On his route he suffered several nearly disastrous encounters with horse-riding brigands, who threatened him but decided he was too poor and worthless to harm. Muir noted the abundance of ferns, vines, and briars that delivered “tormenting blows” and scratches to the self-described “scholar.” He dismissed and derided Jamestown, Tennessee, as a “poor, rickety, thrice-dead village … an incredibly dreary place.” Muir marched on over a sandstone plateau with shallow groove-like valleys and hills covered mostly by oaks and pines, and crossed small clear brooks running every half mile or so. After two days of walking over the Cumberland Mountain plateau, Muir recounted that he “crossed a wide cool stream ….There is nothing more eloquent in Nature than a mountain stream, and this is the first I ever saw….Near this stream I spend some joyous time in a grand rock-dwelling full of mosses, birds, and flowers. Most heavenly place I ever entered.”

My approximation of Muir’s route over the Cumberland Mountains was on US Hwy 127/ TN Route 28. I recommend stopping outside the small town of Pall Mall for a roadside interlude in the Sergeant Alvin C. York (World War I Medal of Honor hero) State Historic Area, with a small park, historic mill house, and mill dam on lovely little Wolf River. It’s a fine place to enjoy a picnic lunch or snack, and to admire the scene. On Muir’s recommendation I bypassed Jamestown, and bore more eastward on TN Route 52. But it is possible that the present Gatewood Ford Road (which crosses Clear Fork River farther downstream) could have been closer to Muir’s true path here.
​
I remained on TN Hwy 52, which is designated as part of the Big South Fork Heritage Trail. That 75-mile driving route consists of a large loop (little of which follows Muirs’ path) beginning in the historic village of Rugby on Route 52, heading west by Colditz Cove State Natural Area; it then joins State Route 296/Taylor Place Road and intersects with U.S. Hwy 127/State Route 28 north to Sergeant Alvin York State Historic Park, on to Jamestown and State Route 154/White Oak Road, from where it loops northeastward to Pickett State Park and returns south on State Route 297 through the heart of Big South Fork National River and Recreation Area ending in Oneida, Tennessee.
​
Muir’s route managed to skirt slightly south of the dramatic river gorges associated with the Big South Fork of the Cumberland River  (and the many spectacular rock cliffs and arches there) now composing the 125,000-acre Big South Fork National River and Recreation Area  (Also www.bigsouthforkpark.com). The northward-flowing Big South River begins in Tennessee at the confluence of the Clear Fork and New Rivers, and carves deeply through layers of sandstones and shale. Big South Forth flows through a spectacular 600-foot-deep gorge before emptying into the Cumberland River in Kentucky. The deeply-carved Cumberland Plateau is a mosaic of hills and hollows, rocky ridges, rock arches, and river valleys. The landscape is replete with evidence of thousands of years of human habitation, from Native American camps to pioneer settlements. Another reason to divert from Muir’s actual route is that the National Park Service has designated over 50 miles of trails along the western rim of the Big South Fork gorge, and over many tributary streams, as the “John Muir Trail” in honor of the man and his Southern Trek. But that memorial trail is far distant from his actual walking route. (If Muir had actually walked this close to this awesome river gorge and mountain scenery, perhaps he would have stopped here and championed protection of this “Yosemite of the East” and the Cumberland Mountains as his life’s mission.)
​
Do not miss this wonderful unit of the National Parks system and the adjacent 19,200-acre Pickett Tennessee State Park and Forest of similar grandeur. Even if you do not have time to linger and admire the state and national parks, at minimum stop before reaching Rugby, on the streamside of Clear Fork River (at a park picnic and river access site) below the engineering marvel of the Highway 52 Brewster bridge. If you happen to be carrying a kayak or canoe, the boat ramp under Brewster bridge is only 6 miles down this beautiful stream from the Peter’s Bridge access and boat ramp.
Immediately east of the Clear Fork River bridge, visit Historic Rugby, located along Hwy 52--a unique community established in the late 19th century with aspirations to be a utopian cooperative. It retains charms similar to an English country town.
​
Muir walked on over mountain ridges to the “shabby village” of Montgomery on the upper eastern slope of the Cumberland Mountains. That village, which served as the first county seat of Morgan County, soon thereafter faded to a “ghost town.” Today there is only the footprint of abandoned building foundations where the Old Montgomery Road passes through. From there, Muir

… began the descent of the mountains. [He] Obtained fine views of a wide, open country, and distant flanking ridges and spurs. Crossed a wide cool stream, a branch of the Clinch River. There is nothing more eloquent in Nature than a mountain stream, and this is the first I ever saw. Its banks are luxuriously peopled with rare and lovely flowers and overarching trees, making one of Nature’s coolest and most hospitable places. Every tree, every flower, every ripple and eddy of this lovely stream seemed solemnly to feel the presence of the great Creator…. 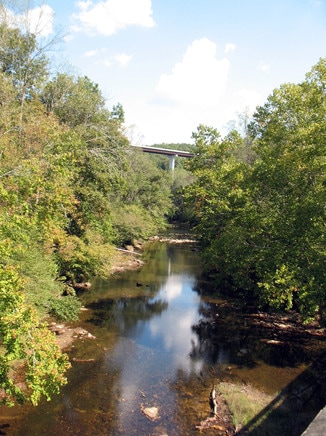 Clear Fork river scene near Rugby, TN
Muir’s unnamed “cool stream” is a matter of debate among scholars – and was possibly Clear Fork, Little Clear Creek, White Creek, or the Emory River, which all descend through gaps on the eastern escarpment of the Cumberland Plateau. Regrettably, the grand rock-dwelling described by Muir was later blasted away in the process of modern road construction. (Read more in Dan Styer’s essay, “John Muir’s Crossing of the Cumberland,” published in The John Muir Newsletter, Winter 2010/11: pp. 1, 4-8.)

​Rather than try to find Muir’s exact walking path in his descent from the Cumberland Plateau, I remained on Hwy 52 from Rugby eastward to Elgin, and from there drove south on U.S. Hwy 27/TN Route 29 to Wartburg (noting that it is located on the Old Montgomery Road). Wartburg was established after Muir’s passage and became the new county seat of government. In Wartburg one finds the National Park Service visitor center for the Obed National Wild and Scenic River and the associated Justin P. Wilson Cumberland Trail State Park. These wild and scenic river parks and rugged landscape contain sections of the Obed and three other rivers and tributary creeks, which have carved spectacular 200-foot-deep gorges through the sandstone and other sedimentary rock of the Cumberland plateau. The streams are riddled by huge boulders fallen from the cliffs above, which creates large whitewater rapids in the rushing waters. Access is limited to a few bridges for either whitewater boating or hiking on numerous trails ranging from short walks to strenuous excursions. The Tennessee Catoosa Wildlife Management Area occupies uplands above the river gorges. Several segments of the Cumberland Trail transect through this national park unit, and one can choose between a moderate 2.6-mile section of the trail at the Emory River Gorge, or traverse a 14-mile, one-way trail segment along the Obed River Gorge.

North 6 miles from Wartburg is the 24,000-acre Frozen Head State Park and Natural Area and its old-growth forests, with 50 miles of hiking trails including another section of the Cumberland Trail extending along high ridges and summits of the Cumberland Mountains. And immediately south of Wartburg (on the north side of the Emory River) is Lone Mountain State Forest .

On his way to Kingston, Tennessee, and descending into the Great Valley between the Cumberland Mountains and the Unaka Mountains of eastern Tennessee, Muir did what cannot be reproduced today in that he forded the Clinch River, then “a beautiful clear stream, that knows many of the dearest mountain retreats that ever heard the music of running water.”   The water of the Clinch River is no longer running and no longer clear as Muir witnessed; it is impounded repeatedly by some of many Tennessee River Authority dams and reservoirs. The Clinch is now a series of man-made lakes. I followed Route 27/29 on south through and by the cities of Harriman to Kingston, with bridges over impounded segments of both the Emory and Clinch Rivers and above the likewise impounded Tennessee River. Above the western side of the Tennessee River valley is the mountain “wall” composed of the dramatic Walden Ridge eastern escarpment of the Cumberland Mountains. In the vicinity are a number of local municipal and TVA lakefront parks and boat access sites.

​​>>>CONTINUE ON through Tennessee...