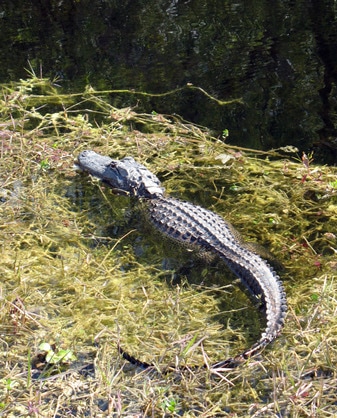 ​Immediately after reaching the port of Fernandina, Muir seems to have taken a southwestern direction into the flatwoods and swamps of Florida. Occasionally along the way Muir would flounder upon some barbaric loggers or hunters who took pity on him, offered him rough food, and warned him of ubiquitous, dangerous alligators. Sometimes he would emerge from the wet swamps to enjoy the more open and drier “barrens, hummock … savannas” with their more scattered but maze-like expanses of trees, grasses, ferns, and palmettos.
​
You may approximate his route west from Fernandina by way of driving west on FL Hwy 200/A1A (called “The Buccaneer Trail” highway). If you wish to recreate Muir’s first path along a railroad line, you will find that Hwy 200A briefly follows a segment of the present Seaboard Coast - CSXT railroad line. You might park your vehicle and for some sense of Muir’s experience, walk a short way along the railroad bed, before returning to your vehicle and crossing intersections with US Hwy 17 and then Interstate 95 and continuing southwest on GA Hwy 200. There, on the south side of Hwy 200, you will find Florida’s Four Creeks State Forest, consisting of 11,000 acres of flatwoods, swamps, bays, and tidal marsh with abundant wildlife and offering miles of public trails or hiking, biking, horse riding, canoeing and camping. These natural communities and habitats again closely approximate what Muir would have seen.

​In Callahan, Hwy 200 joins US Hwy 301, by which you continue on Muir’s most likely course. You will find a similar terrain and dim vestiges of the native vegetation that Muir saw, but the landscape has been severely altered by agricultural and industrial pine plantations. Stop along Hwy 301/200 for a visit to the Cary State Forest, which is located north of your crossing with Interstate 10 and only about a dozen miles west of Jacksonville. This state forest contains expanses of longleaf pine/wiregrass savannas, other mature flatwoods, swamps, and cypress domes with a diversity of rare and common wildlife. Enjoy any of a variety of trails, boardwalks, and environmental education programs here.

South on Hwy 301/200 you can again divert slightly east of Muir’s route to tour Jennings State Forest, which encompasses a wide variety of natural community types including longleaf pine savannas, mesic and wet flatwoods, cypress swamps and ponds. You might wish also to drive through nearby Camp Blanding Wildlife Management Area, which is connected with the Camp Blanding National Guard training grounds.

In this region you will be passing through a cluster of natural lakes on either side of Hwy 301/200, but of which Muir makes no comment. South of the town of Starke, boat landings on several of those lakes are easily accessible from the highway for a quick impression and break from driving and provide public access for a little wildlife watching or even fishing.

This route crosses one of the main sections of the Florida Trail, one of the nation’s eleven national trails: the Palatka-to-Lake Butler State Trail constructed on a former Norfolk-Southern railroad line, near Keystone Heights (also see www.FloridaTrail.org and  www.floridahikes.com ).

In the village of Waldo, you will leave Hwy 301/200 and take FL Hwy 24 west. Unless you have time for a more substantial detour northward, you will regrettably miss the 226,000-acre Osceola National Forest, with its extensive longleaf pine dominated forests and many lakes. Also you are crossing through the O-2-O project area that is designed to become a protected wildlife migration corridor connecting between the Osceola and Ocala National Forests and beyond (for more information explore www.floridawildlifecorridor.org and www.conserveflorida.org/preserving-greenways ).
​
Shortly on your way south from Waldo along Hwy 24, you will find the nearby 2,080-acre Austin Cary Memorial Forest and Learning Center. This is the learning and research forest for University of Florida’s School of Forestry and Conservation, where students learn applied forest management and conservation practices.

Muir’s route had climbed a few hundred feet in elevation and reached a few marginal roads “boring tunnels through forests” but with “much bridging” over wet sloughs. After several threatening encounters, and several days of walking, Muir reached Gainesville. He was favorably impressed by little Gainesville as “rather attractive” and “an oasis in the (wet) desert, compared with other villages. It gets its life from the few plantations located about it on dry ground that rises islandlike a few feet above the swamps.”

Today in the near vicinity of Gainesville you will find a number of interesting parks, natural areas, and museums that are easily accessible off FL Route 24 (called Waldo Road on the eastern side of Gainesville and Archer Road on the southwest side of the city). Linger a while here. Gainesville is home to the University of Florida. Perhaps simply drive out Hawthorne Road (Route 20) to the shore of large Newnans Lake, or better yet, bicycle from Gainesville’s Boulware Springs city park on all or part of the lovely public 16-mile-long Gainesville-Hawthorne Trail greenway along the northern side of Paynes Prairie Preserve and State Park. Be sure to walk out the La Chua Trail boardwalk and climb the observation tower to see Alachua Sink, where alligators often concentrate.
​
Definitely spend time visiting and admiring wildlife on both the north and south sides of the extensive wetland and forest preserve in Paynes Prairie Preserve State Park . You too will be astonished by its natural beauty and abundant, diverse wildlife (including a large population of alligators), just as the Colonial-era naturalist William Bartram was impressed. Yet John Muir made no comment about the natural wonders of Paynes Prairie. Perhaps he was intent simply on moving as fast as his legs could carry him. That was his lost opportunity: don’t miss this world-renowned natural area, where you will find extensive wet prairies and marsh, upland hardwood forests on the higher hammocks, and pine flatwoods on the uplands. These habitats host a large variety of birds and other wildlife, as well as large overwintering populations of waterfowl, sandhill cranes, hawks, and many migratory birds.

From Gainesville if you turn south from Hwy 24 onto US Hwy 441/FL 25 and the causeway crossing Paynes Prairie Preserve toward the main entrance to the state park and the town of Micanopy, there are several highway pull-offs from which to gain at least an overview of the wetlands and see some of the wildlife oblivious (or habituated) to human traffic. Very much worth your short detour is the historic town of Micanopy (only slightly south of Muir’s route), located immediately south of Paynes Prairie Preserve State Park. Micanopy is surrounded by nature preserves and important archaeological and early Colonial period sites – including Lake Tuscawilla (a Native American Heritage Preserve) and the hiking trail on Barr Hammock Preserve and Levy Prairie.

Also on the immediate southwest side of Gainesville (and easily accessible off Hwy 24-Archer Road) are several special stop-and-learn places: the Florida Museum of Natural History, one of the largest collection of ecological, archaeological, and anthropological exhibits in the southern U.S.; the Kanapaha Botanical Gardens, also associated with the University of Florida, which offers 1.5 miles of foot paths through woodlands, meadows, and bogs with collections and exhibits of Florida’s native flora and natural communities; and the Historic Haile Homestead, an 1850s restored farmstead only 3 miles west of Interstate 75, which displays the kind of Florida farm that Muir would have passed or visited for food and lodging.
​
>>>CONTINUE ON to journey's end at the Gulf . . .